The Tricks and The Treats of Halloween Digital Marketing Campaigns

Before we all dust off our cat ears and shell out our pumpkins, let’s spend some time taking a look at the winners and losers of various Halloween digital marketing campaigns from the last few years. Halloween is responsible for the production of thousands of digital marketing campaigns from brands across the globe: some astonishingly innovative and others… not so much.

Throughout this blog post, I will be reflecting on what it truly means to be scarily good or ghoulishly bad in the digital marketing industry. Below, I’ve compiled a list of Halloween digital marketing campaigns with the hope of wholly demonstrating what it takes to create a great seasonal campaign for businesses.

London Midland
This year, the train company London Midland offered a spooky competition which offered their social followers the chance to rename destinations – Milton Keynes becomes Milton Screams, Nuneaton is changed to Nuneaton by Wolves, Coventry could be Coffintry, etc. London Midland uploaded a map of ‘Spooky Stops’ onto their Facebook page, and at the time of writing this blog, the post had garnered 156 likes, 136 comments, and 161 shares. This ongoing campaign is working because it is essentially an advert for London Midland’s train service (and routes) cleverly disguised as a fun competition that can be entered by all. 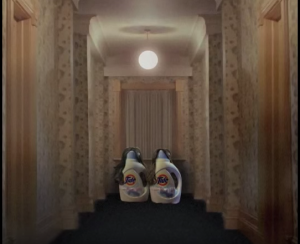 The vine features bottles of Tide detergent, dressed up to represent horror movie characters who weren’t having the best of times. The relevance of the horror references is neatly presented with the tagline ‘Stains Better Be Scared’. This campaign worked because it embraced a playful nature that is otherwise not often associated with a detergent brand and utilised iconic imagery that is recognised across the globe to promote the unbridled fierceness of the product.

REI
Outdoor clothing retailer REI had a stroke of genius when creating this blog post. The starting sentence, ‘Zombie outbreaks happen’ immediately draws the reader into REI’s following infographics, which are surprisingly comprehensive and almost useful. The blog promotes REI’s products as essential tools for hoarding off that inevitable Zombie attack, and offers five critical skills which will help you to navigate an overrun by the undead.

Although not strictly Halloween-based, this campaign is a brilliant example of how simple, well-thought out content and imagery can be used to promote brand products whilst dabbling in the lore of Halloween.

Blair Witch Project
Rolled out on a larger scale to the campaigns mentioned above, the marketing campaign for Blair Witch Project (1999) was a groundbreaking feat for the film industry which set a precedent that is replicated to this day. With a release date of October 22nd, the filmmakers recognised the perfect opportunity to capitalise on Halloween fever. 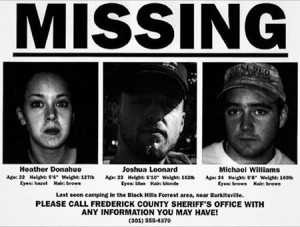 They started with the strategic release of a Missing Persons poster, which detailed the mysterious disappearance of 3 students who were last seen filming a documentary in the woods of Burkittsville, Maryland. The starring actors used their real names when filming and actually disappeared before the film’s release, noted as ‘Missing’ or ‘Presumed Dead’ on their IMBD listing. These simple marketing ploys worked to draw audience interest to the film – the lines between fiction and reality ostensibly blurred.

Upon release, the film grossed over 248 million dollars worldwide, providing the ultimate example of how a low budget film can become a critical success when the right marketing strategy is employed.

Costume Horrors
All the fun of Halloween without the offense – wouldn’t that be nice? Year on year, some costume retailers never quite seem to learn their lesson when it comes to producing controversial costumes. In 2014, a ‘Sexy Ebola Containment Suit’ circled the internet as the dangerous virus spread quickly around West Africa. Doctors of The World, a non-profit humanitarian group, soon created a website (no longer available) to highlight that yes, the Ebola containment suit is definitely more than a costume – it is vital for saving lives. The year before, ASDA and Tesco came under fire for stocking a ‘mental patient’ costume, accompanied by this description: ‘Every one will be running away from you in fear in this mental patient fancy dress costume.’ This horrendous oversight was soon combatted by people tweeting their own faces and pictures using the hashtag #mentalpatient, namely to showcase that the real face of mental health is not something that anyone should be afraid of.

In both instances, these costume ‘tricks’ turned into ‘treats’. Communities joined together and attention was instead placed on what we could do to help those in need and raise awareness on a number of serious issues. Campaigns aimed at tackling the stigmas surrounding these issues were thus organically created as a result of the terrible costumes. As digital marketers, when it comes to Halloween digital marketing campaigns, it is best to err on the side of the caution and create content that is fun, spooky, and not at all controversial.

Arby’s
The key to a successful social media campaign is deciding on the right hashtag. American restaurant chain Arby’s, however, seemed to skip that pivotal conversation in their digital marketing meeting of 2014. 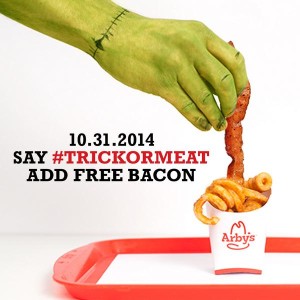 Over the Halloween period, Arby’s decided to encourage customers to say a certain phrase when ordering their meals, receiving free bacon with their order if they did so. The phrase in question?

Twitter lit up with comments, befuddled as to what exactly Arby’s were trying to achieve by using a considerably suggestive hashtag to promote their offer. The motive of goodwill was undeniably there, but the internet is nothing but consistent when it comes to misconstruing good intentions.

Halloween is a great time to let your brand have a bit of fun with their audience, and try something a little more unconventional to test the waters. Here at Active Internet Marketing(UK), we provide our clients with creative seasonal campaigns, as well as a variety of SEO techniques guaranteed to enhance your online profile. If you’d like to speak to a member of our team today about our digital marketing services, do not hesitate to contact us at 0800 772 0650.

This website uses cookies to improve your experience while you navigate through the website. Out of these cookies, the cookies that are categorized as necessary are stored on your browser as they are essential for the working of basic functionalities of the website. We also use third-party cookies that help us analyze and understand how you use this website. These cookies will be stored in your browser only with your consent. You also have the option to opt-out of these cookies. But opting out of some of these cookies may have an effect on your browsing experience.
Necessary Always Enabled
Necessary cookies are absolutely essential for the website to function properly. This category only includes cookies that ensures basic functionalities and security features of the website. These cookies do not store any personal information.
Non-necessary
Any cookies that may not be particularly necessary for the website to function and is used specifically to collect user personal data via analytics, ads, other embedded contents are termed as non-necessary cookies. It is mandatory to procure user consent prior to running these cookies on your website.
SAVE & ACCEPT